Stress Beating Devices that You Need to Try

You would be pardoned for assuming wearable technology deals with fitness trackers only. Over the last few years, there has been a significant increase in tech meant to keep our mind in good shape. A survey showed that stress tracker is the most admired feature from wearable technology. Apple has also ventured into the calming effect via the Breathe Apple watch app.

Of late, there has been little irrefutable research on the benefits of powerful technology to make us calmer. The following gadgets are built for your brain, and you may need to try one.

Serenity will move you to the magical world of relaxation. Made by Tap Tap Tap, it relaxes the mind by showing moving pictures. Some of these pictures include rolling shorelines, leaves, and grass waving in the wind, puppies and flowers. The app is designed in a way that will elicit relaxation. It can work on either iPhone or iPad.

Thync is a mind-altering headset. The gadget has been in production for a long time. Currently, it is in the market, and you would want to try it and see how it works. The device looks like an eyepatch placed on your forehead, it then connects with the companion app to deliver Thync vibes directly to your brain.

Its useful features and signals are designed to make you calmer while giving you more energy. To some fans, it is like taking a pill from Limitless or downing an espresso. According to the manufacturer, the app can alter your thinking by using the neuron signaling process. The process sends low levels electrical energy to the specific neural pathways to activate them and thus altering their working.

This is a unisex, biometric gadget and activity tracker fitted with sensors to track and study emotions for your overall well-being. Based in London, Vinaya is developing an app that will pull data from third parties smartphones and from Zentas own biometric sensors. All this will be used to set up a personalized emotional profile of the client.

The companion app gives and updates insights to its users on the specific tasks that trigger stress, depression, negative and positive emotions, calm and overall well-being. This android and iOS friendly wearable tech is set to roll out in March 2017.

Feel wristband can monitor your stress levels and emotions. Worn on the wrist, the gadget uses multiple sensors that include the Galvanic Skin Response. It can detect the electrodermal response, which is the highly regarded gauge of emotional health and state. When mixed with a movement, the skin temperature and blood volume pressure, the gadget sends data directly to your smartphone.

The data sent will indicate the emotional level and help you identify the specific factors that have an impact on it. Whether it is the environment or people you have interacted with. The app will even offer the meditation and breathing exercises to ensure you are feeling good.

To most people, WellBe is just a normal fitness tracker. However, it is built for general wellness of a person, not fitness. It has an inbuilt heart rate monitor that it uses to detect stress levels based on location, time and the people that you meet. The WellBe app paints a picture of the specific things that trigger stress levels. The app works on the premise that creating more awareness enables you to deal with situations and people in a better way. Whether this tech works to overwhelm or empower you in real life remains to be evaluated.

The app also provides you with different ways of reducing stress levels when they soar. The medication includes a more focus on breathing and meditation. 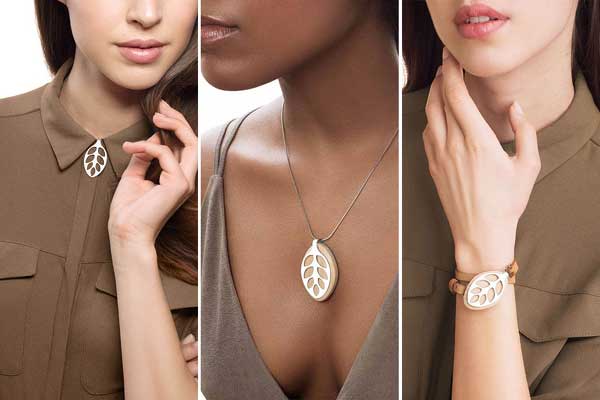 Dubbed as a smart jewellery, rather than a headset, the Bella beat LEAF is an activity tracker developed to monitor sleep, ovulation, and steps. Built to address the plight of women, it has a focus on stress as its core.

This device works on the principle that rushed, shallow breathing equals weight. It thus monitors your inhalation-exhalation and trains you how to be calm and refocus your mind via a chain of inhalation-exhalation exercises. You can visualize these activities by the use of the Bella beat accompanying app.

It is developed to monitor your posture and breathing. The gadget works on the basis that your breath controls a better position and which signifies a happier life.
Once you clip the gadget to your waistband, it will track your chest and diaphragm when you inhale and exhale. By use of coding, the app monitors the breathing pattern and gives recommendations where necessary. These recommendations may include a change in simple games, breath patterns and basic movements.

The above gadgets are designed to ensure that you have a more comfortable life. However, without personal commitment and dedication, all the efforts will fail. Be passionate and follow the recommendations as given. Once you follow them, you are assured of a happier life. Notify the doctor as soon as possible whenever you note any abnormal behaviour in your health.


IFA 2016: What to Expect From Europe’s Finest Tech Parade