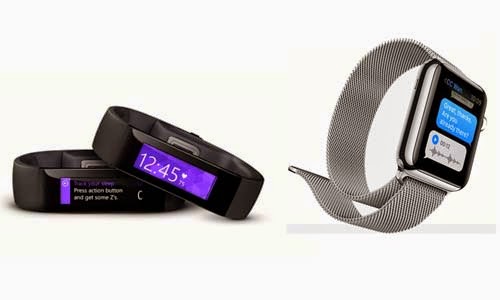 Apple Watch Versus Microsoft Band: Which One Is Best?

Almost everyone has heard of the upcoming Apple Watch and the Microsoft Band, the latter was released at the end of last year. While Microsoft Band is a fitness band only, the Apple Watch has several different functions. In this review we will compare the two devices. Firstly, we will review them one by one, then compare them to each other.

Microsoft’s newest device came out in 29 October, 2014 in the US, however the company hasn’t made the band available and hasn’t confirmed any release dates for other countries other than the United States.

The Microsoft Band functions as a fitness band, which tracks the details of your body, how many steps you have taken, how many calories have you lost a day, etc. The device shows the current time too.

Some critics claim that the band looks rather bad and unfashionable, however, I think the device has a futuristic look, which can be pretty fashionable. The Microsoft Band has a 11 x 33 mm big screen, which seems quite small compared to other wearable gadgets or fitness trackers, however, it is more than enough for a fitness band.

The device has 2 buttons, the power button and the action button. Having a power button on a fitness tracker seems quite rare in the area, since most devices can be switched on by only tapping the screen. This is a quite old school method for powering a gadget, but it’s not a big deal. The action button works perfectly for its functions, which are starting and stopping time, tracking sleep and many other.

The Microsoft Band has 10 different sensors, which help tracking your body and sleep. The tracking works flawlessly, however, it would be great, if Microsoft would improve it by fixing the bugs and tweaking up the functions. 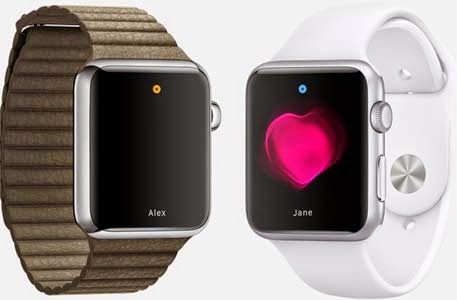 The Apple Watch looks quite neat and fashionable. I’m certain that people will buy it just for its look.

The Apple Watch features the time tracking of the device, which makes the gadget one of the most precise watches in the world.

Apple has invented a new type of communication for the Apple Watch. Since the device’s screen is quite small compared to an iPhone, you have to communicate in other ways then messaging. If someone writes you a message or contacts you, you can either respond by writing him or her a message, drawing pictures or sending him or her your current heart rate. This could be a great function, since you don’t have to write down what you want to tell, you can either communicate in pictures or respond with your heartbeat to show your chatting partner how excited you are at the moment.