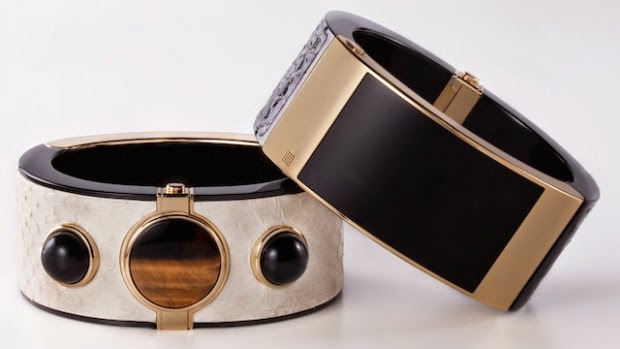 Apple has released a new smartwatch bracelet for women who are fashion conscious. The bracelet dabbed MICA (My Intelligent Communication Accessory), was unveiled at an event in New York Tuesday night.

This feminine communications accessory is expected to go on sale early next month and will offer access to Facebook events, Google calendar, text messages, Gmail and Yelp. Its touchscreen is made of sapphire glass.

You can get all these applications on your phone or smartwatches at much lower price, so why MICA? There are two key differentiators that make the MICA more expensive than its competitors.

It is capable of connecting to the internet on its own without having depending on your smartphone. So, your MICA bracelet will have its own phone number that you can give out to only those you’d want to message you on the device. It is meant to provide a quick, convenient way to talk to people you contact most frequently rather than replacing your phone.

Secondly, it is being marketed as a luxury accessory, meaning it is made of high-end materials.
Intel also believes women like to strap a flashy, blinged-up gadget to their wrists rater than carrying around a mobile device. It has worked with Opening Ceremony, a global retail chain, to design the gizmo.

Women like flashy things that they can show off and according to Intel they would love a bracelet composed of snakeskin and semi-precious gems and MICA fits the bill in this case. MICA comes in a number of styles that users can choose from. The styles include black water snake skin, stones from Madagascar, white water snake skin, obsidian from Russia, tiger’s eye from South Africa and pearls from China.

The communication accessory will first be sold by just a few retailers which will include the New York store chain, Barney’s. But later it will be expected to be available in many other retail stores.

Daniella Vitale, the chief operating office at Barney’s said mobile technology really guides everything they do. He added that the issue for many consumers on wearable technology lies in the fact that the devices typically are not attractive and are often times cumbersome.

“Intel had the prescience to create something functional but also beautiful and chic. We are exited to be the first on something that mirrors the Barney’s strategy of a beautiful, exclusive and unique product.”

This communication accessory will cost $495. This will include two years of wireless data from AT&T. the device charges using micro USB and can last for up to two days before being recharged. That will be great for those who are traveling since they will not worry so much about running low on power. But it must be remembered that battery life also depends on usage.

It is available in the US only. Intel has not yet disclosed when it will be available in other countries. It’s now just a matter of waiting to see how women will respond to this device.