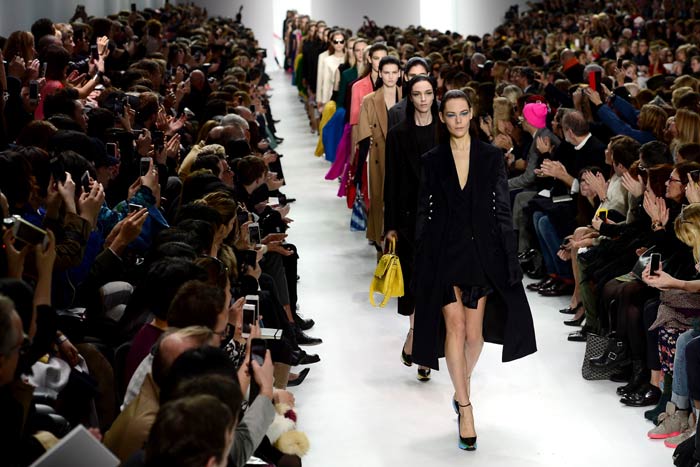 Paris fashion week is the home of traditional luxury brands and its uptake of digital and tech innovation has always been wanting. The event is more inclined towards conventional fashion collections and the popular catwalk shows. However, once you bring in Hussein Chalayan into the equation, technology and fashion begin to converge at this monumental fashion expo.

Chalayan is a British-Cypriot designer who has a long history experimenting with the role technology can play with his apparel. He is previously quoted saying that new things in fashion are only possible with technology since everything else has already been done. That’s precisely what he has done today in collaboration with tech giant Intel.

Chalayan’s Spring/Summer 2017 Fashion Week show incorporated never before seen smartglasses and belts that are powered by Intel. As his five models catwalk on the runway, there are visual projections that showcase their stress levels besides them on the wall. This is possible through the biofeedback communicated from the accessories the models are wearing.

The stylish glasses that form part of the fashion accessories are powered by a low power hardware unit dubbed the Intel Curie Module. It allows designers to add functions to a number of devices and gather biometric data on the wearer via sensors. The sensors monitor the heart rate, brainwave and also gather breathing data to allow inferring of stress in real-time. The brainwave monitoring sensor uses capacitive electroencephalogram (EEG) electrodes while a microphone is used to capture the breathing rates. An optical heart rate sensor is used to measure the variability in the heart rate.

The collected data is thereafter communicated to a belt put on by the models through a Bluetooth Low Energy (LE) connection. However, this was for demonstration purposes and the Bluetooth function is intended to allow communication from the smartglasses to another device such as a smartphone. 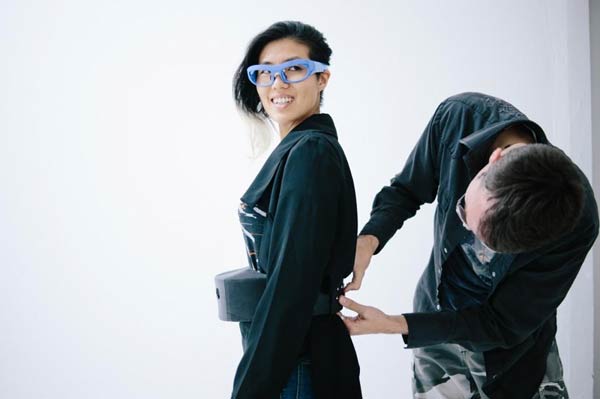 The Intel Compute Stick, which is a tiny computing unit just about the same size as a pack of chewing gum, powers the belts the models have on the runway. They capture biometric data received from the smartglasses and convert the information to visualizations. These visualizations are interpretations of the user’s stress levels and are seen on the walls at the fashion show as the models catwalk. The visualizations are made possible by a tiny Pico projector housed within the belts.

The purpose of the visualizations is to help the wearer be aware and proactive in the management of stress. During the presentation the models engaged stress reduction methods like breathing techniques and this changed the imagery projected from the belts.

Exploring Self Expression and Emotion in the Digital World 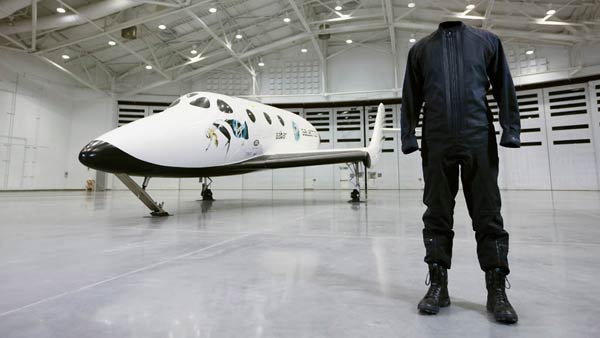 The projections at the Paris Fashion Week showed a series of five studies that included omnipresence, beings, imminence of danger, outer measure and stiff upper lip. The show at large had a “Room Tone” theme that’s about how realities and attitudes in London life can be experienced or optimized. It is basically about exploring emotion and self expression in this digital age.

The accessories on display on the runway are at the concept stage currently and aren’t expected in the market soon. However, Intel’s Vice President of the New Technology Group, Sandra Lopez points out that they are part of the company’s broader roadmap. Their agenda is to pursue partnerships that push the boundaries of creativity and innovation. Commercialization of the concept is dependent on how such ideas can be readily implemented. In the case of the Hussein Chalayan project, the sensors that are already commercially viable can be incorporated into other products by the tech firm.

Other instances where Intel has engaged in the fashion oriented tech projects include collaborating with Oakley on the Radar Pace smartglasses. Another was with Opening Ceremony on their MICA smart bracelet. Intel is keen on keeping the fashion and technology ventures going because they see the promise in it.

Lopez suggests that creating the market for the newly developing wearables takes roughly five years and at the moment we are at around year 3.5. The advancement of the technology, mainly around aspects of soft computing and ability to offer fabric like capability will hasten the adoption in the soon-to-be future. This is also very dependent on the fashion and technology industries working together, as the Intel VP in-charge of wearables explains.

According to Lopez, the collaboration with Chalayan was inspired by concern on the stress of everyday. The joint venture was meant to find a way to manage stress proactively using technology. The goal is in line with the tech firm’s intention of using wearables to improve human life.

Smartglass Revolution is here with us- Facts You Should Know