In most cities’ neighborhoods and fancy buildings nowadays, you must have noticed the many Ubers, Ocado vans and Deliveroo bikes ferrying passengers or pulling into the flat parking lots. That is convenience that’s bound to grow even bigger in future. However, the new issue arising from the convenient delivery trend is whether you would be comfortable having packages delivered into your home in your absence. This new kind of service could be in the works following reports from two leading smart home device producers.

The report is contained in article hub The Information (subscription needed) and further scrutiny indicates that the service may be provided to Amazon Prime members. The companies that may be working with Amazon on this are August and Garageio. The former makes smart door locks while the latter is into garage door locks. Currently, customers with Amazon Echo are allowed by August and Garageio to check and lock their doors remotely but aren’t able to unlock.

The two tech-lock firms are working on coming up with technology that would enable e-commerce couriers in the houses or flats of their customers. The one time access option would be incorporated in the delivery documentation at check-out. The delivery person would then key in a temporary pin on the lock or smartphone. The assumption is that it would work with a doorbell camera which is being sold in a package by August alongside its Smart Lock and the Smart Keypad accessory. 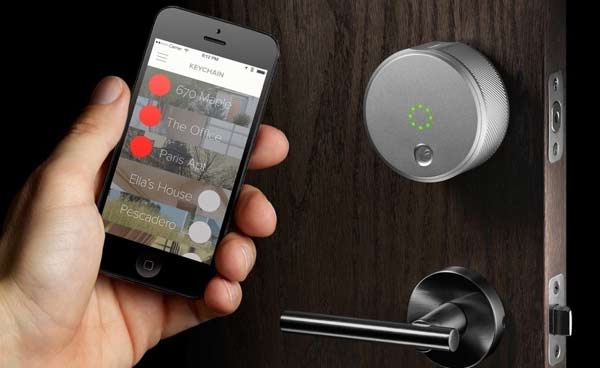 Amazon is the likely retailer in test-runs

Neither August nor Garageio have disclosed that they are looking to collaborate with Amazon and it could be another retailer that is involved. However, many of the facts surrounding the two firms’ relationship with Amazon make it the most probable scenario. These pointers include that the trial run is being done in Seattle which is Amazon’s headquarters location and Amazon is Garageio’s only external investor. Also, the cost savings to Amazon if this deal were to actualize are enormous.

Tests done using the August lock revealed that most of the goods delivered had no external protective packaging. The packaging that originally comes with the purchased items such as a computer doesn’t need a second box for protection as they will be left indoors. This model of doing deliveries will enhance protection of purchased items from weather or theft. The biggest gainer would be the retail firms who would save on packaging expenses. Landfills would also be happy at the reduction in dumped external packaging.

Amazon continues to grow and it also delights its customers with rapid delivery that’s free in the case of Amazon Prime members. On the other hand though, the August smart door locks aren’t really many in the homes. The same goes for Garageio’s garage door openers which show the great potential for this piece of technology.

The August lock has been a work in progress for some time following the company’s plans on the Access platform. The service was partnering Fetch and Sears, Postmates and Handy and came up with a lock that opens at specific times and days to do house cleaning, pet appointments and repair.

The convenience that may result from this service is undeniable as it is a handy solution for those among us caught up at work. However, it may be dangerous if there are protective dogs in the compounds. Another major concern is the likely home intrusions and risk of theft that could arise from engaging the indoor delivery services.

There hasn’t been confirmation on the chances of rolling out the in-home delivery service on a global scale. The convenience is, however, a factor that bound to win-over many shoppers to try it. The never-ending wait for deliveries and the compounded misery when you don’t get the door in good time may all be issues of the past thanks to this soon-to-be released innovation.


Smartglass Revolution is here with us- Facts You Should Know